In the U.S. we have a national program for school children that allows them to get get reduced cost or free meals. Meals are available to all students and based on family income, some children are eligible for either free meals or reduced-cost meals that can be no more than $0.40. Recent data was released with last year’s numbers. However, I wanted to normalize the data based on population and the most recent numbers I could find for public school population were from 2008. This map shows the percent of students who participated in 2008. 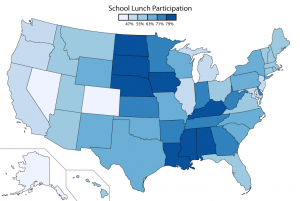 I also wanted to see which states were changing over time. I compared the 2008 numbers to 2012 numbers and then subtracted 3.23% to account for the overall U.S. population growth since 2008. Participation is up almost across the board.

Because reduced-cost and free lunches are available, I wanted to see if there was a correlation between participation and poverty. Although the program is called the National School Lunch Program, breakfasts are also available at some schools. Breakfasts have lower participation in every state. Lunch participation has a per-state median of about 60% compared to 20% for breakfast participation. At first the correlation didn’t seem to be that strong, but on a whim I separated the data by meal type and saw this unique result: 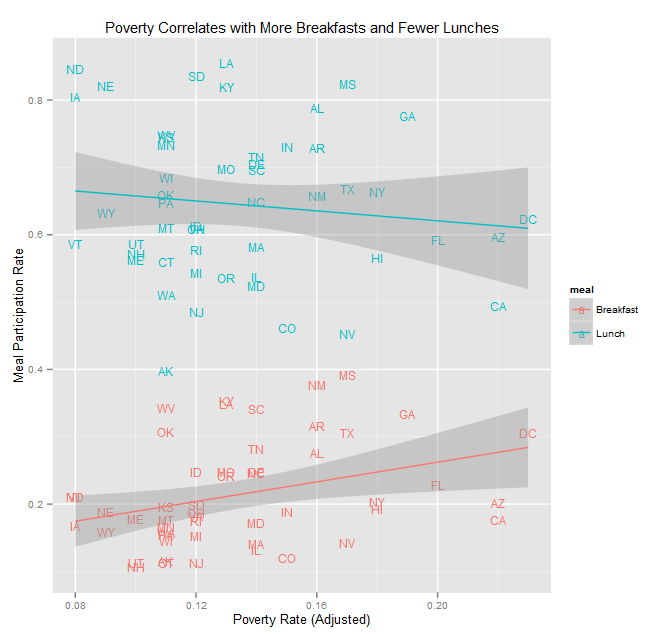 This is one of those head-scratcher moments where the data and intuition don’t align. I did some research on NSLP participation and as it turns out there are many factors at play that could be contributing to these results. For fear of stigmatization [PDF], not all school districts offer a breakfast. If only the most impoverished districts offer a breakfast, there is not access for all students. There are also cultural and peer stigmas that may dissuade students from participating. Another study [PDF] found that there are problems with both under-participation and over-participation: students who should qualify don’t use the program while students who should not qualify do use the program.

Since the national government has relatively little to do with pubic education, it is important for states and school districts to look into these types of issues on their own. I found many articles extolling the benefits of these programs and we should do everything possible to ensure students who need food assistance have access to it.