Maybe it was Stats 101 or a psych class or a business class, but if you had to learn about any statistical testing in school, you probably learned about the Student’s t-test, or just “t-test” for short.

When you learned about this test, you probably took a small data set of numbers, ran through the arithmetic, looked up some numbers in a table and concluded that the populations either are different or the same. The test is so pervasive, it’s even built into Excel with the TTEST function. Unfortunately there are several (often-forgotten) assumptions of t-test that often make it the wrong test to use!

YouTube recently started rolling out Google+ integration for users to use their real names on the site. This is one of many changes they are working on to improve to awful quality of YouTube comments. I hypothesized that real name users are less likely to use profanity.

To test this, I used the YouTube API to gather about 7500 comments and information about the comments’ authors to determine if they are real name or username users. (Check out my post on web scraping with BeautifulSoup for more details.) Finally, I counted uses of about 30 profane words and variations in the comments.

When I run a t-test on the data, I am given a p-value of 0.2924 which means there is a 29% chance I would have gotten these results if there is no difference between real name and username commenters’ profanity rates. But a t-test is the wrong test to use because my data does not meet the assumptions of the t-test!

The t-test makes six assumptions, but I want to focus on the normality assumption. For the t-test to work, your data should be pretty close to normally distributed, i.e. in a bell curve. The YouTube comment data is not normal. Thankfully, there are statistical tests that do not assume a normal distribution known as “non-parametric” tests. The non-parametric counterpart of the t-test is the Mann-Whitney U test. Because my data meets the assumptions of the Mann-Whitney test, I can use it. The result is a p-value of 0.0015 which means there is a 0.1% chance that I would have gotten these results if there were no difference between username and real name commenters.

When to use the Mann-Whitney test

Here’s a very manageable dataset showing some physical data of students before and after a health class. This is a distribution of weight by sex: 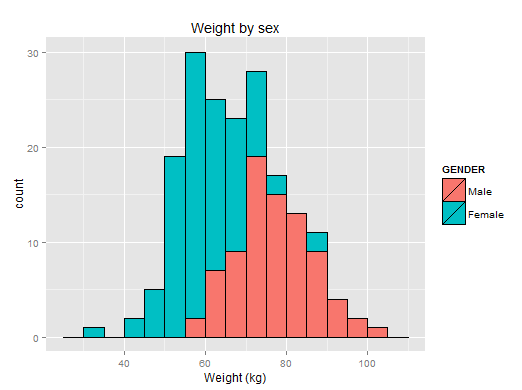 We can definitely see a difference between males and females. Furthermore, the data looks normally distributed. A qqplot can confirm this:

Since our data meets the assumptions of both the t-test and Mann-Whitney, we have to decide which to use. Or do we? Take a look at the results:

So you can see that while the t-test is appropriate in some situations, it’s requirement of normality is so critical that there are many times it will not work correctly. Always check the assumptions and when in doubt you’re less likely to fail with a non-parametric test!