In the last two posts we explored three different algorithms for solving the n-queens problem. If we wanted to actually implement one of them, we would need to consider which one performs the best. However, performance can be measured in a number of ways.

In terms of success, both steepest hill climbing and annealing perform equally well (>90%), but first choice hill climbing falls short at only solving approximately 14% of problems. These also hold true regardless of the number of queens.

Measuring performance time is the most interesting because the results scale in an obvious pattern. For 8 queens, the clear winner is the steepest hill algorithm. But if we increase the number of queen, both hill climbing algorithms get much slower, while annealing only gets moderately slower: 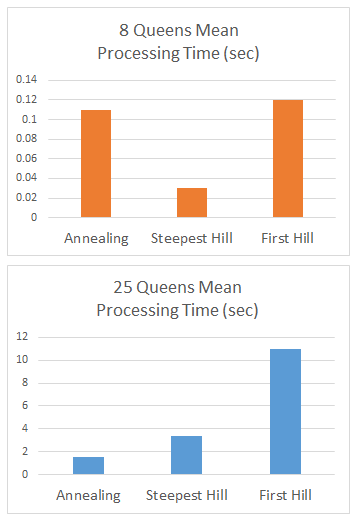 By creating random n-queens puzzles, we can get a very clear picture of how processing time varies with processing time. Consider the following scatterplot: 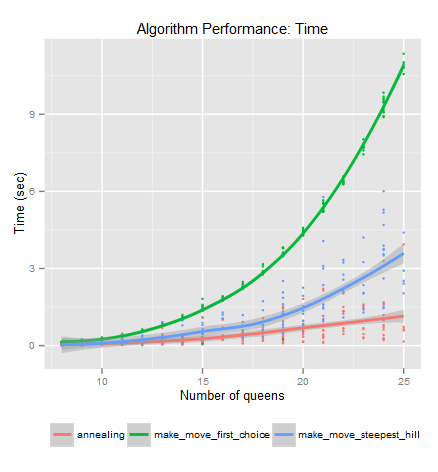 Clearly, the first hill algorithm becomes increasingly impractical as the number of queens increases. Steepest hill has a less dramatic increase in time, while annealing only has a modest increase.

This brief look into some searching algorithms should give you some insight into the many considerations that must be made for actual problem-solving tasks. If you’re interested in learning more, I recommend Russell and Norvig’s Artificial Intelligence: A Modern Approach (Amazon affiliate link). They explore many more related algorithms and delve more into the computer science aspects of algorithms.