IMDB is a website that aggregates various pieces of data about movies and television series. Users can submit their own data, including reviews and ratings. IMDB has several datasets available for download, one of which is the rating data for every entry in their database.

I chose to look just at TV series and even within that set of data, there is a lot of interesting information. One note on the data: users can rate an entire show on the show’s main page and/or rate individual episodes. This data only looks at the individual episode ratings.

The top rated and lowest rated series was easy to find, but I wanted to exclude odd, esoteric series that few people have seen. These tables show series that have an average of at least 250 votes per episode.

My wife says this can’t be accurate because “Veronica Mars is a great show,” but I guess the internet disagrees.

Another way of controlling what gets placed into the top and bottom is to look at overall votes. By looking at series with a total of at least 1000 votes, we get to see shows that (generally) span a longer time since more episodes equals more votes.

Even with this adjustment, many of the top shows are the same. However, the bottom shows are a bit more interesting in this table. We see shows with many seasons and no story arcs (e.g. talk shows), but also the controversial sitcom House of Payne.

Note that consistency doesn’t necessarily correlate with overall rating (even with all shows plotted out). Taken and Sponge Bob have similar overall ratings, but they are very different in terms of consistency.

I pulled the best shows with only one season and the worst shows with at least five seasons. To be fair, some of the one-season shows are intended to be mini-series. However, you’ll also notice many cult classics.

Top Rated Series with One Season:

The worst shows that have at least five seasons are particularly interesting because it shows a disconnect between the people who rate TV shows on IMDB and the public at large. These shows are or were profitable otherwise the television companies would cancel them.

In looking at this data, I noticed that it’s pretty hard for a show to get a low rating. The large majority of shows are in the 7-9 range, and very few shows have an average below 5.0. The median rating was 7.4 which may be a side-effect of a 1-10 rating system. Notice also the two up-ticks at 1.0 and 10.0. (Click to enlarge) 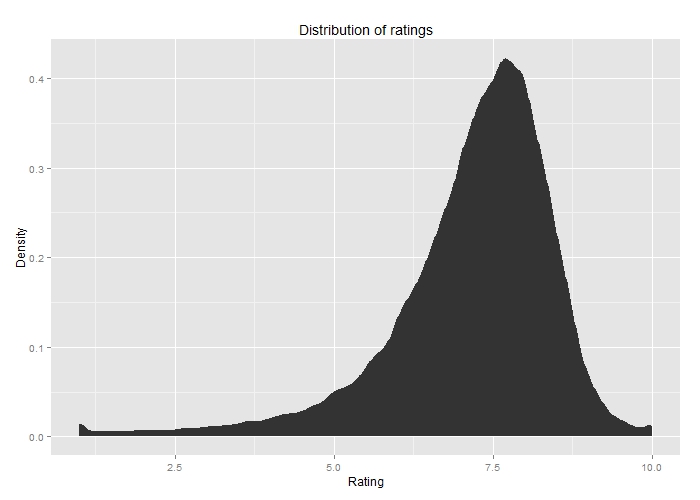 A distribution graph of the ratings of TV shows on IMDB. 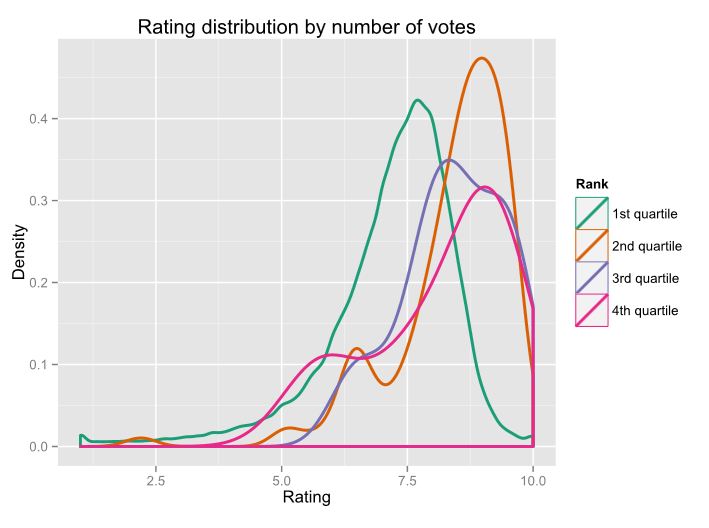 Distribution of IMDB ratings, broken down by quartile.

The first quartile is almost identical. The fourth quartile is interesting because it has two distinct modes. If a popular show has a bad episode, it likely draws in more people to vote giving us the peak around 6.0.

Since the episodes in the fourth quartile are also often the highest-rated, I wondered if there was a correlation between number of votes and rating. Logically, it makes sense that the better a show is, the more popular it is, and therefore more people will be voting on it.

This chart has jitter applied because I found the distinct bars to be distracting. (Click to enlarge) 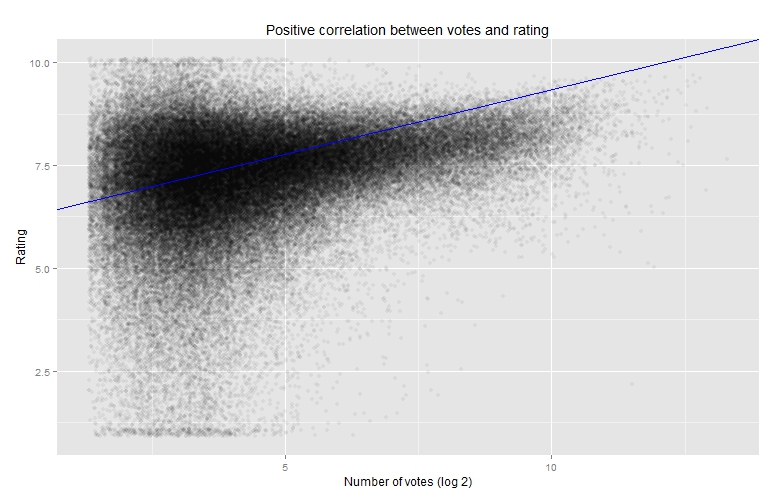 Comparison between the number of votes and avg. score.

My opinion is that a good show should only rarely go past five seasons. Most of my favorite shows are ones that knew when to stop. This chart shows the distribution of episodes according to season (outliers excluded). (Click to enlarge) 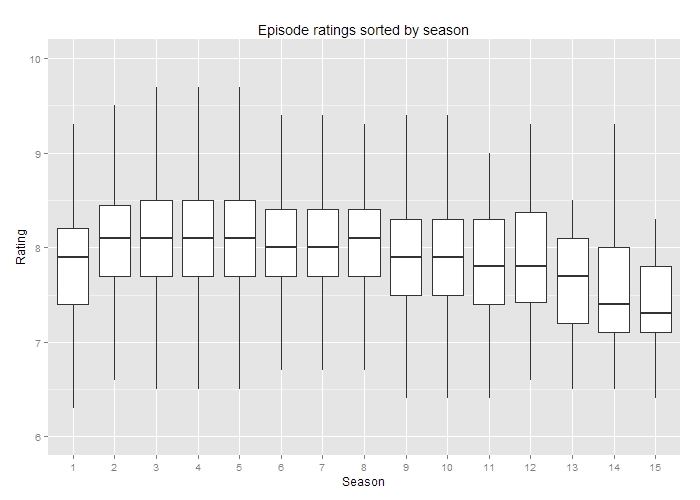 My five-season marker seems to hold true in this chart. There’s a noticeable dip for sixth and seventh seasons. And after eight seasons, it’s mostly downhill.

Many critics agree that television in the past few years is the best it has ever been. We’re getting movie-quality writing, acting, and directing over dozens of episodes. To test this, I plotted the median rating per year since 1980. (Note, the data set shows the year in which the series started, not the year of the episode itself.) 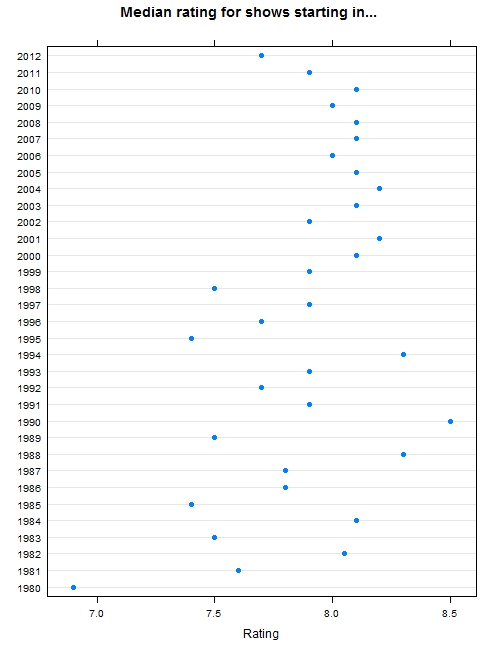 The median TV series rated for each year.

While not definitive, you can definitely see that starting in 2003, TV has been moderately consistent. This is change from the 80s and 90s when it was more hit or miss.